Jenna Riddle: Just do it! 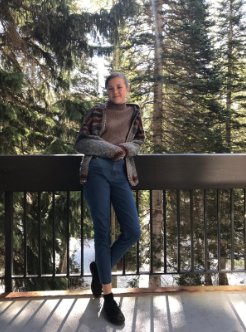 Those are the words 8-year-old Jenna Riddle said before jumping off a cliff. Her family was down at Lake Powell and a group of the guys were jumping off cliffs into the water, her dad told her he didn’t think she would do it.

Riddle was born in 2002 in Salt Lake City, and has lived in Sandy, Utah her entire life. She has attended Hillcrest since her freshman year.

Riddle grew up swimming. She took swimming lessons at Cottonwood Heights for a few years and went to one pre-comp race.

After taking a break from swimming for a couple years, Riddle came to Hillcrest and decided to join the swim team She has competed in state swim both years on the team.

“I grew up swimming until I was like 7, and it was kind of like off and on. And then I kind of stopped swimming for two years. And then in high school I was just like, you know what I’m gonna join the swim team!”

Riddle loves swimming and loves her team just as much.

“Overall everyone is really supportive of each other…Competitions are really strict, but it’s okay we all kinda just like pat each other on the back if we don’t do good.”

Hillcrest High School is in 6A region 2, which means Hillcrest competes against Cyprus, Granger, Hunter, and Kearns.

“If I hit in the range of 25 then I’ll will be on like the top four or five girls to ever hit 25 (for the girls 50 free.)” Riddle explained. “We got second place, (at state) barely, I was like racing to the end you know just swimming as hard as I could when it was my time to swim. This girl beat me by like .10 milliseconds and we were really close to getting first.”

Riddle clearly has a talent in swimming, but also has other hobbies. Riddle loves to dance. She dances all types but specifically latin and country dancing. Riddle also enjoys being on Hillcrest’s Track and Field team. Riddle is in the field section track and field. She throws Javelin. Riddle is also on the varsity Girls Golf team.”

“I just decided you know what, I like Javelin because it’s not like where I have to race, like in swimming. I just want a break from that kind of scene.” Riddle explained. “I joined javelin because it’s nice and peaceful on the grass and you can hear the wind blowing. And same thing with golf, it’s just kind of calming.”

Riddle doesn’t exactly know what she expects and wants after high school. She wants to travel the world and explore and just have fun.

“Just do it!” This is Riddle’s advice for life. Just do it, and have fun.