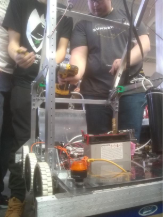 Many Hollywood movies display fighting robots, and that has been favorable in the eyes of many teenagers. The unique experience of creating robots to achieve a purpose helps students express themselves, learn how things work together, and get a new experience through a really cool club.

At 2 p.m. on March 6, Hillcrest’s Robotics team left  for San Diego and returned on the tenth. They are going to San Diego for regional Championships!

In San Diego, the team will be participating in a nation-wide robotics competition, as well as going sightseeing and visiting different places.

The team will be competing in multiple types of competitions.

This robotic competition will encompass robots from different school around the country competing to see robots lifting and moving balls.

The Robotics team has what is called a build season, this is a 6 week period where the team works on and builds a team robot in which will be used to compete in region championships. At region championships, teams will be competing to see which robot can

Islam said, “Each mechanism/team/robot is named after something that is Spacey. That is because this year’s theme for FIRST is ALL SYSTEMS GO which is space and astronomical themed.”

This year, their robot’s name is Sputnik. After competing, the team almost made it to quarterfinals.

Islam said, “We didn’t end up in quarterfinals which sucks, but we are first alternates which means we might have a change to get in if a robot breaks down.”

Hillcrest’s Robotics team placed 10th out of the 30-40 teams.