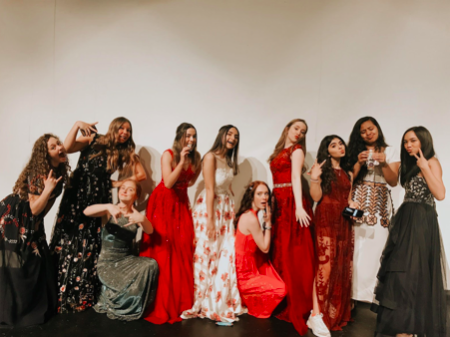 One of the most exciting nights for high school students across America is Junior Prom. A night to dress up, dance and later reminisce. At Hillcrest, the huskies prepared for this special day and partied hard that night. On March 9th, prom 2019 was held. As Junior Annika Torres said “Junior prom will be one of the best nights of high school, so let’s make the most of it.”

Leading up to prom, the week was filled with related festivities, Monday through Friday was a spirit week and on Thursday the Prom Royalty assembly was held. At the dance Peter Jacob and Kat Otuafi were crowned King and Queen. As Junior Nate Burri said “Peter has always been the King, now he has a crown to prove it.”

The theme was “All This Time” a song by One Republic, chosen by the Junior class officers as they planned this dance. Hard work and dedication was put into this event, as the planning has been on going from the moment they were elected. Junior SBO Vice President Kate Timmerman recalled “I can’t believe it’s already here!”

At the dance it was nothing short of perfect with a beautiful venue and amazing music. Hosted at This Is The Place heritage park the venue was a rustic and classy setting. The playlist was made by Junior class vice president Nick Waddoups and DJ’ed by local DJ, DJ LIVE.

Overall, with an amazing week and amazing night, Prom 2019 was a success. The student body thanks the Junior class officers for all their hard work and can’t wait to see what’s in store for next year.