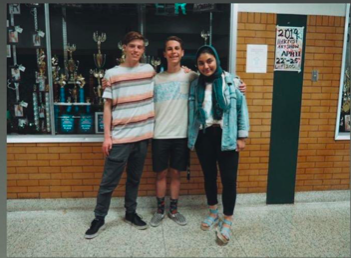 Now that the 2019 school year is coming to an end it is time to pass the leadership down. Student class officers are responsible for leading their classes to success and a year full of spirit.

The race for the offices was tough as there is no limit to how many can run. This election was jam-packed with over 30 people running combined. The video assembly was long and held on Tuesday, April 23.

The senior class officers being Nick Waddoups (president)  Emily Rimmasch (vice president) and Emily Smilanich (secretary). All 3 formerly lost running for SBO but decided to give it another chance. The candidates are excited to serve the senior class, as Smilinach explains “ I’m most excited to be able to plan senior sunrise, senior dinner dance, and graduation.”

The winners for the Junior class officers are Max Lepore (president), Judah Mismash (vice president) and the Hibba Ahmed (secretary). All the candidates were extremely relieved and excited when they were announced, Ahmed states “the feeling when I won was one of the best feelings ever. A rush of adrenaline and passion for my school. I am honored to be junior class secretary and am so ready for the best year of my life.”

After the long election the candidates are excited to be chosen by their class and are ready to represent. They are in for a year filled with spirit and hard work. Congratulations to all the newly elected class officers.