Rugby and the Benefits of it 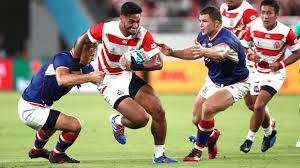 Rugby is a contact-based sport that originated in England in the 19th century. Commonly misconstrued as a ripoff version of football, rugby is indeed very different from football than others may think.

“It’s so much more than that…it’s its own sport…but for someone who has never seen it, the sport being described as a mix of football and soccer is accurate enough…” Says Kat Otuafi, a senior at Hillcrest High School.

However, something interesting about rugby is that players can throw the ball, but only behind them or to their side. There are several ways for players to score points for their team. One of the ways to score is called a try; a try is when a player carries the ball into the endzone and touches the ground with the ball, this is worth five points. After scoring a try, the player is awarded a conversion; a conversion is when the player kicks the ball between two goalposts, this is worth two points.

Unlike American football, there are no set possession limits. This means that a player may roll on the ground and still have possession. The game is played in two forty-minute halves, the team with the most points at the end of the eighty minutes wins.

Rugby is played for many reasons, one being the health benefits. Rugby can improve your cardiovascular fitness, endurance, agility, speed, ball-handling, and kicking skills. When something improves your cardiovascular fitness it means that is improving the ability for the lungs and heart to supply the muscles with oxygen-rich blood and the ability for those muscles to use that blood. Poor cardiovascular fitness can lead to a disease that can kill anyone afflicted. When one has improved their endurance, it means that they can do physically unpleasant or difficult things for longer periods of time. Low endurance can lead to your muscles being weaker than they should to properly control the body.