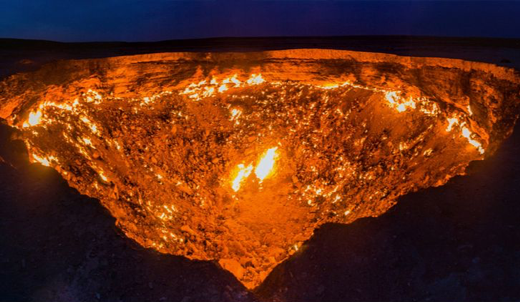 Just 6,281 miles away from Hillcrest High School, the Door to Hell is on fire.

The Door to Hell is a nickname for the Darvaza Gas crater located in the Desert of Darweze, Turkmenistan. This crater has been burning about the same time Hillcrest was opened in 1962. It will have been burning for almost all of Hillcrest’s years, and will probably be burning longer than Hillcrest’s original building will be alive.

This giant crater has not been around for very long, around 1960 a group of oil workers in Turkmenistan, (then still part of the Soviet Union,) decided to set up an oil rig and camp in the empty desert of Turkmenistan. They set up a camp on the area where this giant crater is and drilled for oil.

According to Wikipedia, while drilling, a pocket of natural gas was discovered. It is believed that soon after the whole camp and rig collapsed, burying itself in this giant pit.

Nearly 48 years after being lit on fire, this giant crater is still burning-hence the reason for being called the door to Hell.

At night, the giant yellow flames can be seen as far away as 25 miles. It is 69 meters in diameter, and 30 meters deep.

The Darvaza Crater has become a sort of tourist attraction and has even been on/mention in several television shows, on YouTube, and on National Geographic.