White privilege is about more than bandaids 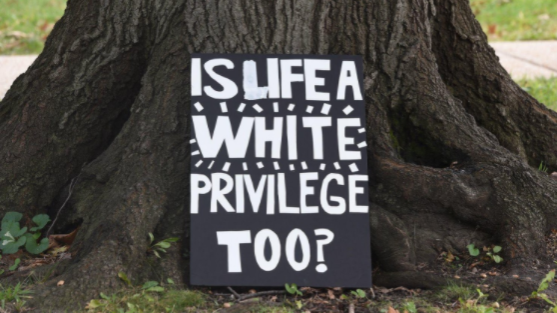 White privilege is like a shameful veil of guilt held over the heads of Caucasians all over the world. The word was first used in an essay written by Peggy McIntosh, and for many people, it seems accusatory and rude.

Some white people refuse to acknowledge the advantages they’re born with because of the color of their skin and this ignorance of privilege leads to more oppression of people of color.

White privilege is like being in a race. The white people are given pairs of shoes to make running easier and everyone else has to run barefoot. The shoe less people could win, but they’d have to work even harder than the people with shoes.

The reason why white or white-passing people have more opportunities is that the world is built for whites to succeed and everyone else to fail. According to history.com, white people have had the advantage for thousands of years.

In the early years of America, there was slavery and then there was segregation of races. Although race is an imaginary construct, it affects us every day. Black people, as said by pbs.org, have to learn how to talk to police differently because they’re more likely to be shot and incarcerated. Black males are twenty times more likely to be shot dead than their white counterparts.

In her essay, Mcintosh talked about how to identify if you’re in a position of privilege.

“I can do well in a challenging situation without being called a credit to my race…. I can go into a music shop and count on finding the music of my race represented, into a supermarket and find the staple foods that fit with my cultural traditions, into a hairdresser’s shop and find someone who can cut my hair.”
Privilege is something that everyone has, and someone can’t choose to be born privileged or not, but what a person does with that privilege is what is important. In a position of power, it is their to be good allies.

The organization Showing Up For Racial Justice, tells us that African-American people only make sixty cents for every dollar a white person makes, and white people are five percent more likely to be hired for a job. All of this can feel overwhelming for a person who has never experienced, but for many people of color, it’s a fact of life.

White privilege has a negative perception because some white people feel like they are being attacked because of their race. They say that they had to work for what they have or that they’re poor so privilege must not exist.

It’s the job of people in a position of privilege to help less privileged individuals by trying to even the playing field.  Listening and trying to understand people of other race experiences with privilege is a great way to learn.