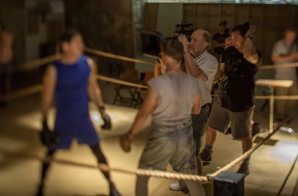 Permission given by: T.C. Christensen

“He believed in the laying on of hands…”

“The Fighting Preacher” was released July 24 of this year and tells the story of the Willard and Rebecca Bean, a young married couple who are asked by Joseph F. Smith to leave their home in Utah to re-establish the Joseph Smith Farm in Palmyra, New York.

Throughout this film, Willard Bean, the boxing world champion of 1905, along with his wife and daughter learn to make friends through love and kindness, rather than with their fists. This makes for a difficult trial when the Bean’s entire community is set against them, and has nothing to share but hateful attitudes and turned backs.

This movie is very family friendly, and has life lessons present that can influence any person who watches it. The morals of love and forgiveness are taught throughout, and the characters slowly but surely come to befriend and love each other.

At one point in the movie, Rebecca Bean has a touching experience that not only affected the character in real life, but the people who produced the movie decades later

After filming this scene, Director T.C. Christen went back to look at the monitors. “Everyone had tears in their eyes and were crying,” he said in an interview with the Husky Paw Print. “ And I’m just like yeah, that’s going to be a good scene because even without music with the finishing touches and everything,…this is good.”

“The Fighting Preacher” is unique because it is a true-life story. And the cast aren’t just regular actors..

“A lot of the extras were not just regular paid extras. They were the grandchildren and  great grandchildren of the Beans,” said Christensen. “ They’re moving around with us, it… created a great mood on the set…I would introduce them and would know, wow, these people are real. The Beans are not just made up actors, this is real and here’s their grandchildren.”

“The Fighting Preacher” is a must see!

Keep in mind the film is about a real Church of Jesus Christ of Latter-day Saints family and their story. It teaches about morals and spirituality. If you’re looking for something spiritual and filled with good values,—or even just a laughter-filled show—this is it.

“They deserve to be honored,” said Christensen about the Bean family. “ Willard and Rebecca were amazing people.”