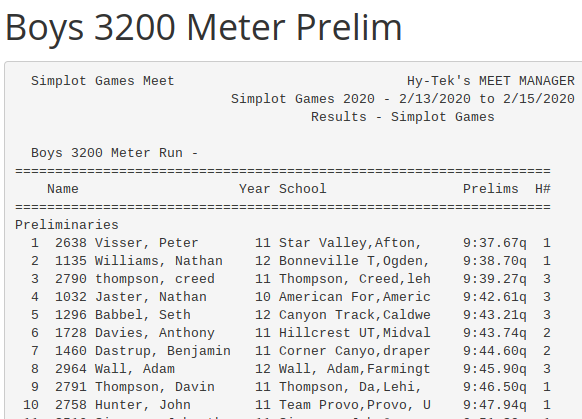 In only a matter of 9 minutes and just over 24 seconds, Hillcrest Junior Anthony Davies broke both his personal and school record for the boys 3200m (2 miles) at Idaho State University. The University hosted the famous Simplot Games on February 13 and 14 at the Mini-Dome in Pocatello, Idaho.

Simplot games have been going on since 1979. They are North America’s Premier Indoor High School Track and Field Event.

Five different Hillcrest athletes raced at Prelims in the boys 3200. They wouldn’t find out who was seated to run in the Finals the next day until later that night.

While Davies wasn’t very satisfied with his race time the day before, he made it up at finals as he came in first.

Davies’ first place was a pleasant surprise for both him and the team. We all knew he was fast, but for the most part, everyone, including the cameras, was focused on the top two runners: Peter Visser and Creed Thompson also from Star Valley.

As finals were taking place Davies’ made his way up to third place and stayed there knowing he had somewhat of a chance. As he rounded the last corner he kicked and sprinted out in front of Thompson and Visser, winning Finals.

Charles Hooper, one of Davies’ fellow Hillcrest athletes, said, “Everyone thought Peter Visser was going to win and no one really knew who Anthony was.”

According to Davies, his favorite part of the race was afterward when he was able to go and congratulate and talk with his other competitors. It was a new sense of accomplishment and pride he hadn’t experienced before.

Way to go, Davies, breaking school records and his own.