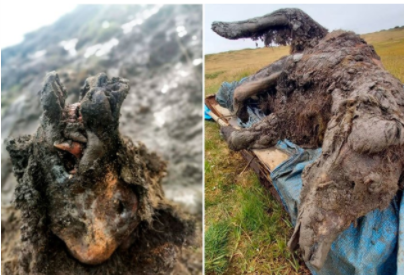 Earlier this year, the oldest Ice Age bear was discovered in Russian ice caves. According to CNN, reindeer herders found the bear on the Lyakhovsky Islands. CNN reports after the find they then turned the right of research over to NEFU.

This bear, Ursus Spelaeus, is the oldest of its species found with its soft-tissue still intact. Prior to this, the oldest bear dated back only 15,000 years.

One thing scientists are amazed about is this bear’s nose is still intact, all its tissue and organs perfectly preserved.

“Wow, that’s crazy!” said Ella Vincent, a Junior at Hillcrest High School. “If I saw that I’d probably squint and be really confused!”

As reported by Chernova dn Kolirin, the research team believes this bear became extinct 15,000 years ago and lived in Eurasia in the Middle and Late Pleistocene period.

Due to the permafrost, Chernova and Kolirin say mammoths, Wooly Rhinos, Ice Age Foal, puppies, and cave lion clubs have also been discovered in Siberia.