2020 NBA Playoffs: Playing in a Bubble 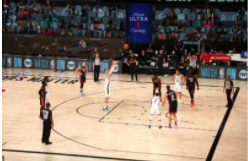 The 2019-20 NBA season was put on hold on March 11, 2020, when Utah Jazz center, Rudy Gobert, tested positive for COVID-19 prior to playing the OKC Thunder. Delaying the season made many people question when, and if, basketball would return.

Adam Silver, the commissioner of the NBA, was given a short amount of time to make an important decision. The biggest problem Silver was facing was finding a safe way to resume the season without putting players and staff at risk. Silver found this solution at Walt Disney World in Orlando, Florida, which consists of three separate hotels for players and staff, seven practice courts, and three arenas.

“We are hopeful of finishing the season in a safe and responsible manner based on strict protocols now being finalized with public health officials and medical experts,” Silver said.

After playing inside the“bubble” for nearly two and a half months now, the NBA has found great success in protecting the players from the coronavirus. Since entering the bubble, no players have tested positive for COVID-19, according to Popular Mechanics.

Now, with only two teams remaining in the NBA Finals, the Miami Heat and the Los Angeles Lakers, only one hotel and arena are required to keep a safe distance between the players and staff.

¨I think that the [Miami] Heat will win in six [games],¨ says Jack Roggeman, senior at Hillcrest High School. Despite the Lakers being the heavy favorite, Roggeman has faith that the Miami Heat can succeed as the underdog.

The NBA hopes to crown a champion by October 13, if the best-of-seven series were to need it to determine a winner. League officials are thrilled with the outcome so far, but are hesitant to celebrate too soon.

Washington Post says, ¨Avoiding those eventualities is cause for champagne, even if it must remain on ice for another two weeks.¨