NFL games forced to reschedule due to COVID-19 outbreaks 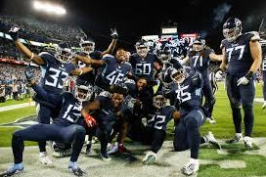 The National Football League (NFL) has played more than 100 seasons, but 2020 so far has been unlike any other. Going into 2020, the NFL knew they would have to prepare for a unique year. One of the biggest challenges for the NFL during the pandemic has been containing COVID-19 outbreaks.

Despite testing its players and personnel multiple times a week, the NFL has had to deal with multiple players testing positive, and spreading it to other players. The first team for this to happen was the Tennessee Titans.

The NFL expects to have to postpone other games this season, as they are facing unique challenges. They hope this is the only year they have to deal with these difficulties, but for the time being, the league has acknowledged that fans will be affected by changes.

Ian Pfeil, a student at Hillcrest high school, is a life-long Buffalo Bills fan. The scheduling changes in the NFL has impacted him in big ways.

“I’ve been craving to watch football for a long time. But because COVID-19 has caused delays of the games, it makes me as a football fan annoyed and frustrated because we’ve been waiting for months to watch these games but now we have to wait until certain games are played.”

The Bill’s Week 5 game against the Titans was postponed for two days due to the positive tests, and they had to play on Tuesday the 13. Pfeil wasn’t happy about the change.

“It was saddening because you’re looking forward to your Sunday morning where you can relax and watch your team but when the game was postponed I was annoyed and sad that I couldn’t watch in on my day off of school and work. So to adapt I’ve had to move plans.”

Zurab Belkania, another student at Hillcrest high school, approves of the league’s handling of games during the pandemic.

“If I was the commissioner of the league, I would keep the NFL going but also do what he is doing now with postponing games if players are sick,” Belkania shares.

“It was a little weird having to postpone a game because one person became sick on the other team, but it was all okay in the end because people were just helping to keep our team safe.”

Chamberlain and the rest of the team had to miss their first soccer game against Cottonwood high school after a Cottonwood player tested positive for the virus. Chamberlain, like the NFL, hopes for a better future for her senior year.

“I hope that doesn’t happen next year because I hope that cases of corona will go down significantly and we don’t have to worry about a game getting postponed next year,” shared Chamberlain.