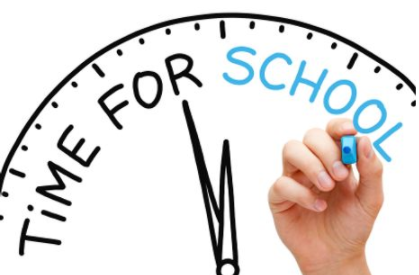 Almost every teenager I know would prefer to sleep in longer instead of waking up so early for school and most adults with jobs would also choose to sleep in. School start times have always been a debate and some people are in favor of starting school later, while others think that school should start at the same time, or even earlier.

There are a lot of benefits that would come from starting school later in the day. Even if it’s just an hour or two.

Schools should start later in the day. Students and teachers will be better rested and be able to focus so much better. The later the class is in the day, the more likely students are to do well. When students are tired, they are either falling asleep in class or thinking about how tired they are.

As much as people would like students to go to bed earlier in order to get 8 to 10 hours of sleep each night, that’s just not reasonable.

Many students involved in extracurricular activities do not have a lot of free time after school to do their homework. Because of this they are staying up very late and not sleeping enough. This also happens with teenagers who have jobs after school. Going to bed so late makes teens even more tired the next morning.

In the article, they say, “Studies now show clear links between insufficient sleep and obesity, diabetes, depression, suicidal thoughts, and more”. All of these things are affecting millions of teenagers every day.

School starting too early puts teenage drivers in danger because they are driving drowsily. As well as keeping teens safe, later school start times improve test scores and overall class performance. When students get a good amount of sleep, they are generally more healthy.

Sarah McKibben wrote an article called “Wake Up Calls” and in this article, she says that 33% of teenagers report falling asleep in school because they are tired, and ⅔ of all teenage students say that they get less than 7 hours of sleep per night. This is an alarming statistic considering that adolescents should be sleeping 8 plus hours every night.

In the end, there are a lot of reasons why schools should set back their start times to be later in the day. Many students will greatly benefit from getting more sleep, they will be in less danger when driving to school, and they will have amazing academic results showing how smart they are just because they are well-rested.