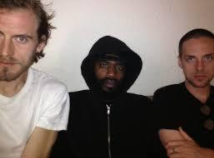 Death Grips checks every box for things that older people despise in songs, horrible lyrics that talk about drugs and death, extremely loud and annoying songs, and a band that is incredibly disobedient. At a point in 2013 buying a ticket for a Death Grips concert was “considered a gamble” on whether or not they were going to show up to the concert.

Death Grips makes incredibly unique and raw feeling songs, pushing the boundaries of what is, considered regular music with the extremely violently yelled lyrics from MC Ride and the impressive drumming and the many different noises produced by Andy.

They have made 7 albums with each one containing their own sound. Their most popular album, The Money Store, has influenced a few huge people in the music industry including, Tyler the Creator and even Kanye West’s album Yeezus. Even though Kanye never explicitly states that Death Grips has influenced him the similarities in the abrasive sounds, the lyrics, and even how it was released.

In one of Kanye’s songs “New Slaves,” the first 20 seconds of the song’s music video is very similar to the music video “I’ve seen footage” with many different images being shown on screen.

Tyler the Creator, has explicitly stated that he very much enjoys listening to Death Grips.

“I put on the Exmilitary mixtape and Lionel and I put together a full trampoline in 17 minutes. That’s when I realized that Death Grips was my meth”

In the review of The Money Store, Tyler also states:

“I don’t know what it was, but it led me to believe that I had a grip on death”

I would highly recommend listening to at least one song in any of their albums because every single album has an entirely different noise. If you are going to listen to their albums I would start with their mixtape Exmilitary (This album is not on Apple Music or Spotify look it up on Youtube). If you like that then try The Powers That B and The Money Store.

Note: Death Grips has a lot of swearing and talks about very violent things if that’s something that you avoid.