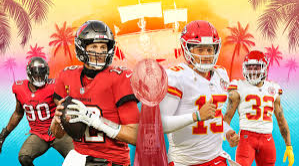 Jason Pierre-Paul and Tom Brady will lead the Bucs’ fight for the Lombardi trophy against Patrick Mahomes’ and Tyrann Mathieu’s Chiefs.

When Tom Brady and the Tampa Bay Buccaneers beat the Green Bay Packers 31-26 in the NFC Championship on January 24, he broke a record that he himself had already set. Brady is now going to play in his tenth Super Bowl, (Super Bowl LV) which is more than any other player in National Football League History (NFL).

Brady, who is widely regarded as the greatest player of all time, is 43 and still playing hard. The opportunity to win his seventh Super Bowl won’t come easy for Brady, though. He has to face the reigning champions in the Kansas City Chiefs.

The Chiefs, led by reigning Super Bowl MVP Patrick Mahomes, beat the San Francisco 49ers in Super Bowl LIV just a year ago. Mahomes, who recently won an MVP, is widely regarded as one of the best young talents in the league. NFL.com ranked him as the third best player in the league for 2020. He’ll be starting his second Super Bowl in a row after defeating the Buffalo Bills 38-24 in the AFC Championship.

Analysts are fascinated by this Super Bowl matchup. Brady’s Bucs had to win 3 road games in a row to get to the big game, and he has offensive weapons. Antonio Brown, Leonard Fournette, Mike Evans, Chris Godwin, and Rob Gronkowski have all been Pro-Bowlers in their careers. They have a ferocious defense too, led by Devin White and Jason Pierre-Paul. They’re coached by head coach Bruce Arians. With the playoffs, they are 14-5, and they’ll be the first team to ever play the Super Bowl in their home stadium in Tampa Bay, Florida.

On the opposing team, Mahomes and the Chiefs are regarded as the best team in the NFL. They’re reigning champions, and the playoffs put them to 16-2. Mahomes has the best tight end in the game in Travis Kelce, and speedster Tyreek Hill to work with. Tyrann Mathieu and Frank Clark lead a nasty defense, all being coached by legendary coach Andy Reid. The NFL landscape is hyped to see the GOAT in Brady, and the young star and MVP in Mahomes face off. Adding to the drama, the Chiefs beat the Bucs 27-24 earlier this year, in a tight fought game.

Beyond all the statistics, players, and records, Super Bowl LV is special in its own ways. According to CBSsports.com, only 22,000 fans will attend the game, which is about a third of the near 66,000 seats that are allowed in Raymond James Stadium. For another thing, only about 14,000 of those 22,000 will be for fans to purchase. 7,500 of the tickets are going to vaccinated health care workers, chosen by the 32 NFL teams across the country. The NFL is promoting the vaccine’s safety and effectiveness with inviting the health care workers, as some people in the country have been hesitant to take the vaccine. Due to the small amount of tickets on sale, the cheapest tickets on nflonlocation.com are up for $8326.00, a momentous price for a three-four hour game.

Beyond who can attend the game, Super Bowl LV will be different than any other game before. For one thing, the iconic Budweiser advertisements won’t be present, as the company has decided to not pay for their usual commercials, instead deciding to donate the money they would’ve spent to the pandemic. Coca-Cola and Pepsi are deciding to do the same.

Despite the pandemic continuing to dominate everything that happens in the world, the NFL is doing its best to make Super Bowl LV a distraction from it. The popular artist, “The Weeknd” will perform at halftime for the 22,000 at the stadium, and the millions watching at home around the world.

Overall, Super Bowl LV will be highlighted as a unique Super Bowl for years to come. From the health care workers to the timeless Brady vs. the youngster Mahomes, the fight for the Lombardi trophy will be more different than ever. Super Bowl LV is on Sunday, 2/7, at 4:30 P.M., and can be watched on CBS.