The most frustrating scoring for sports award goes to Drill Team 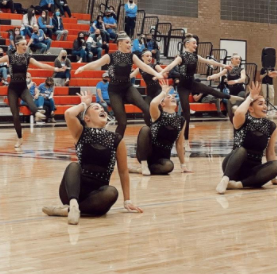 Drill team is a huge deal in the state of Utah. When people think of drill teams, they usually think of military marching drill routines, either armed or unarmed, that are very well known in Texas. But here in Utah, drill is focused on precision dancing.

Drill team is a year round sport. The team auditions are typically in April and this is when spring training and conditioning starts. The summer is a time of team bonding and learning choreography. August through October is football half-time performance season, as soon as November hits, it is crunch time for competition season.

Competition season goes from the beginning of December to the beginning of February. When the last competition, State, is over, it is time to prepare for the last performance of the season; the year-end show is in the first week of March. Then, it’s time to audition again in April.

Drill team is considered a sport due to the competition aspect. Each competition is scored based on meeting certain criteria. There are typically five judges assessing every routine in their classification. Each judge is given a sheet of paper with four categories to score the routines based on: choreography, execution, appearance/showmanship, and difficulty.

It is the team’s goal to check off every box in every category for the highest score out of 100 points. From there, each judge ranks the teams they saw that day. Next, is the total ranking score is based on the Copelands pairwise comparison voting method. The rankings will add up to a certain amount of points, the team with the lowest amount of rank points wins.

The competition organizers then will split up the classifications groups into pods. Pods are smaller groupings, for example instead of all 37 5A schools competing at once, only six or seven schools would go against one another at each competition.

At each competition, teams perform three routines. The categories are military, dance, and show. Drill teams spend many hours, days, and months perfecting their routines to perform only six minutes on competition days. On average, most schools spend around three hours a day, five days a week practicing and perfecting.