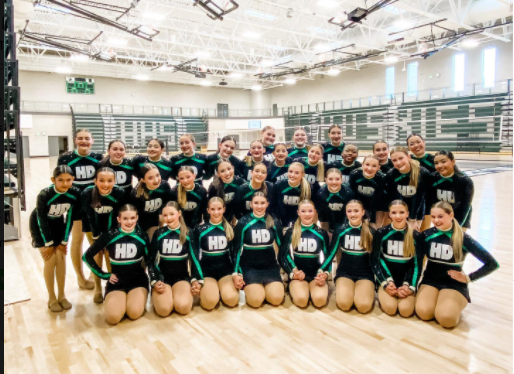 For Utah drill teams, competition season is the most important time of the year. Each school prepares three difficult dances to show off their cleanliness, strength, endurance, and skill to prove they are the best of the best.

Military is a seemingly strange form of dance set to epic music with aggressive yet exact movements, created to show off the team’s sharpness, precision, and flexibility.

The Dance category is for the more ‘typical’ style of dance where the teams can show off their turn technique, leaps, jumps, and create beautiful works of art. Styles can range under this category from an artistic lyrical dance to a more jazz-esque type.

Show is a new category this year, using props set to a mash up of previous years’ Character category and hip hop. The goal is to make a confident and fun routine to blow the judges and audience away.

Each school spends all year practicing, using the summer and spring to brush up on and refine technique before learning the dances in the fall. Countless hours of hard work goes into each dance, the teams picking their best dancers to put on the floor and act as one seamless unit.

Teams typically compete in invitational and regional competitions in the winter months to get practice for State. And finally, in early February, every team from across Utah comes to compete at the large UVU stadium for the State Competitions, held by UHSAA. In a typical year free of COVID-19, the stands are filled with parents and supporters to watch the final showdown. Only a few of those teams move on from Semi-Finals to compete at the Final competition the next morning, a great achievement for each of those schools to hear their name announced as one of the top competitors.

This year, Hillcrest’s very own drill team was able to achieve one of the spots in the eight out of eighteen 5A schools, competing among the best of the best. Their character for the Show category, HD was really able to put on a show as jesters as they stormed the UVU castle.

The judges watch and critique from above, giving scores in four different categories: choreography, group executions, dance technique, and overall effect. They also look out for anything that could give the team a penalty from ‘illegal’ tricks to stepping on props. In a sport so competitive, even one penalty can prevent a team from getting that top tier trophy.

“As a senior, this was my last drill state competition and I couldn’t be any prouder of my team and how we placed!” says Madi Alvey, Head Captain of Hillcrest Drill. “I know my girls went out on that floor and gave it everything they had, there was nothing but passion and love.”