Strange sports around the world 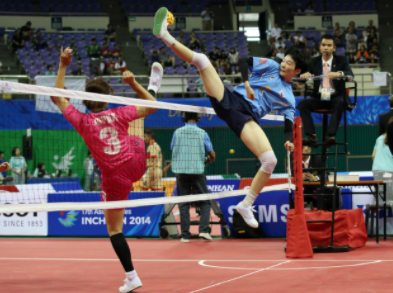 Cultures emerge from all different parts of the world, so it makes sense that sports would have unique variations too. New sports are often created based on what is available and what the people enjoy doing.

Sepak takraw is a sport that originates in Southeast Asia and dates back to as early as the 15th century, according to Wikipedia. It has similar skills and rules that would be used in more familiar sports such as volleyball and soccer.

Teams of two to four players hit a synthetic rubberized plastic ball back and forth over a net while only using their feet, knees, and head. It is a very quick-paced game and requires much skill and control to play.

We all know the game tag, and we all know the game capture the flag, but what if you added an extreme to it, like the tackling of football or rugby? Kabaddi is just that. It is most popular in the Indian subcontinent and from its surrounding countries, even the national sport of Bangladesh, according to ESPN.

Kabaddi is played between two teams of seven players, while one player from each team goes to the opposite side of the court to try to tag as many defenders as possible and make it back to his/her side without being tackled.

Spikeball has a more recent beginning of a new sport and is quickly gaining popularity. It was first invented in 1989 and was popular for a few years until its equipment became outdated, according to Recreation Insider.

The new sport has become more and more popular in recent years it has become a fun hobby and summertime activity. Soyer Smith, Junior at Hillcrest High School and fellow spikeball player says, “[Spikeball] makes me feel extraordinary inside.”

As the world continues to develop, who knows, maybe we will all be playing a variation of basketball while riding a unicycle.