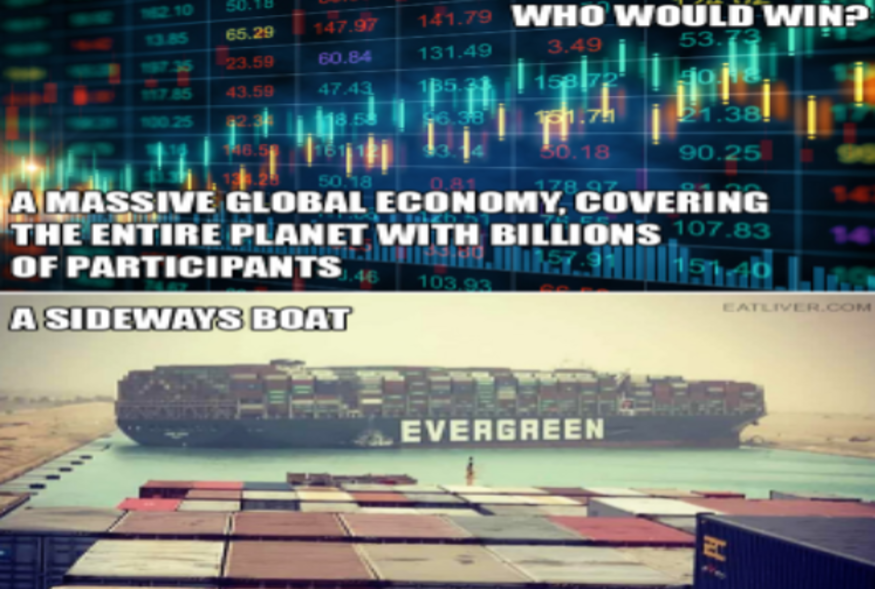 One of the many memes created

You may have seen one of the numerous memes made about the cargo ship, Evergiven, being stuck in the Suez Canal. Well, the effects of this accident extend a little more beyond the funny memes.

After being run aground for nearly 6 days, the Evergiven was finally freed and able to continue its course on March 29.

The Evergiven is a Japanese owned cargo ship–one of the largest in the world. This giant ship runs almost 400 meters in length, and can hold over 200,000 metric tons of cargo.

The Suez Canal lies in Egypt and connects the Mediterranean Sea to the Red Sea. According to CNBC, nearly 12% of the world’s commerce passes through the Suez Canal. The 6 day blockage delayed almost $400 million of cargo an hour according to BBC.

Hundreds of ships were waiting to pass through. The canal connects Asia and Europe and is vital for trade. This means that all the cargo that was supposed to pass through the canal wouldn’t be able to arrive on time. One alternate route was available for some cargo ships to take, but it would require sailing around the southern coast of Africa and backup to Taiwan–adding an additional 8.5 days and 3,500 miles according to BBC.

“We will see ripple effects continuing into the second half of May,” said Lars Mikael Jensen. Not only was the global economy affected, but Utah saw gas prices increase. Luckily for Utah, there are ports on both sides of the continent. We aren’t dependent on a single place to receive goods.

“The Suez Canal blockage piles onto a strained global supply chain. The jam has become a primary concern and has already started to drive up prices.” said Insider.com “Oil prices rose as much as 4% on Wednesday, less than 24 hours after the port was jammed.”