NBA fans return to the stands 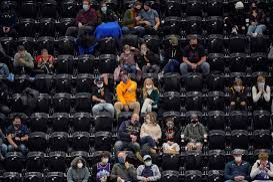 Fans back at a Jazz game under new guidlines

As more and more people have become vaccinated, NBA teams have started opening their stadiums at limited capacities for spectators. In fact, by the end of April, the only teams that will continue to allow no fans in their stadium are the Chicago Bulls, Oklahoma City Thunder, and the Portland Trailblazer. All 27 other teams have either already opened up, or plan on opening up in the next couple of weeks.

Over the course of the season, most teams began to have fans in attendance. Only a few teams began the season with fans in seats, one of those being the Utah Jazz. The Jazz has had fans since their home opener against the Minnesota Timberwolves on December 26, 2020.

While the Jazz’s stadium, Vivint Arena, may be open for fans at games, it certainly is far from the normal atmosphere that Jazz fans have come to love in years past.

Mike Lepore, an adult in the nearby Sandy community, recently went to a Jazz game against the Cleveland Cavaliers.

“It was good to get back to a little bit of normal. With fewer fans in attendance though, the team pumped in artificial fan noise to make it seem loud. It was obvious, which made it annoying. It would have been better if they hadn’t done it and I had been able to hear more of the game and what players were saying,” Lepore said when asked about his experience.

NBA teams have been relying on artificial noise to try to make the game appear more normal, but it hasn’t always worked out great.

Keaton Glover, a freshman at Hillcrest who plays for the basketball team, has attended several Jazz games this season.

Glover shared how the games now “are different from regular-season games. With the social distancing and mask requirements, the arena felt empty, but it was still fun to go support our team.” Glover actually enjoyed the space, saying “It was more fun than a regular-season game because the arena was not as crowded.”

Another student at Hillcrest who has attended some Jazz games this season is Ryan Caswell. Caswell shared that “During COVID everyone has masks, social distancing, and for some reason, you could only order food from an electronic kiosk vs. being able to order food normally. No bags were allowed… But it’s still the Jazz, so it was freaking lit. Very much enjoyable.”

Lepore, Glover, and Caswell all had enjoyable experiences at the Utah Jazz games this year. While it’s clear the experience is far from normal, it’s still awesome to see Utah fans get the opportunity to watch their team compete live.

It has been more than a year since the NBA initially suspended their 2020 season, and it is amazing to finally see both the teams returning to play and fans returning to watch the sport of basketball. Stadiums may not be open to full capacity, and the atmosphere may be very different than fans were used to, but the fact that 90% of NBA teams are hosting fans is an amazing sign for both the NBA and the sports community in general.

If anyone ever wants to purchase a ticket for an NBA game, tickets can be bought at ticketfaster.com, seatgeak.com, or any other NBA ticket purchasing website.