Hillcrest Pro-Co goes out with a bang 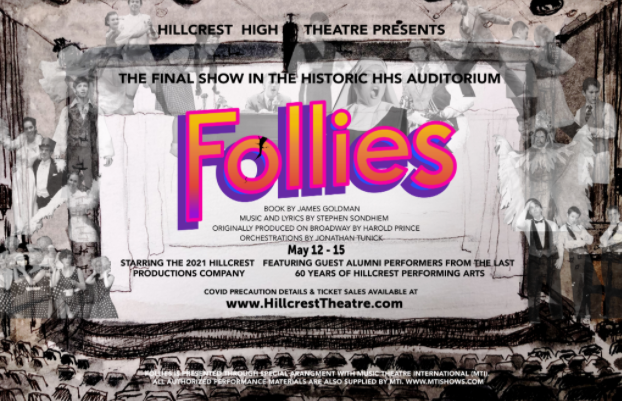 Productions company’s “Follies” promises to be a spectacular show

As everyone knows, the old Hillcrest building is being torn down at the end of the school year, and there are going to be many chances for both current students and alumni to say goodbye to their school. The performing arts department has decided to use their last performance as a special tribute to the traditions and legacy of Hillcrest.

This spring’s production of “Follies” will invite performing arts alumni back to say goodbye to the school, and give them one more chance to perform on their high school stage.

According to hillcresttheatre.com, “over 90 alumni from the past 60 years of Hillcrest Performing Arts will join the 2021 Productions Company in telling Sondheim & Goldman’s insightful, heartbreaking, and ultimately hopeful story of performers returning to their old theatrical home and encountering the ghosts of the humans they used to be.”

“It’s a really unique and cool experience that I’ve never had, and I’ve done a lot of stuff here. It’s been pretty enjoyable so far,” says senior Jake Winegar.

Because this is the last performance in an auditorium that is more than 50 years old, there is a little more pressure than normal to make this show one of the best that Hillcrest and the community have ever seen.

“I feel like more than usual I have to give it my all, especially since I’m putting so much legacy to rest. It’s a pretty big honor that I feel we have on ourselves. I feel like I owe it to the school to do a good job,” says Winegar.

The show will be May 12-17 and tickets are already on sale at hillcresttheatre.com. Each ticket will cost $10, and social distancing will be observed.

According to Winegar, “It is going to be a spectacle and a half. It is incredible some of the things that we are doing. And I think it has the potential to be one of the greatest shows that has ever been on that stage.”