Overview of the Royal Wedding 2018 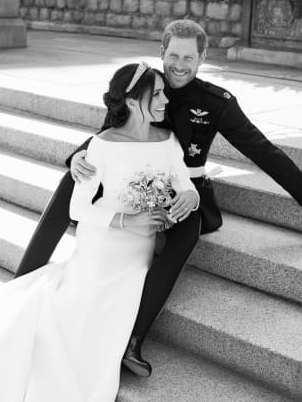 Crowns, Ball gowns and The Beckhams all that and more were present at the event of the century. Windsor castle welcomes a new princess at the Royal Wedding.

Prince Harry and Meghan Markle married on May 19, 2018. On the morning of the wedding it was announced that “The Queen has conferred a Dukedom on Prince Henry of Wales. His titles will be Duke of Sussex, Earl of Dumbarton and Baron Kilkeel. Prince Harry is thus His Royal Highness The Duke of Sussex, and Markle has become Her Royal Highness The Duchess of Sussex.” says British vogue.

The wedding was everything you could imagine glamorous, beautiful, classy and absolutely groundbreaking. The wedding caught everyone’s eye not only because of the fact the couple is biracial, but because of the barrier breaking of royal tradition.

For starters the even the day of the wedding went against tradition as royal weddings usually take place on a weekday. The Duke and Duchess of Cambridge wed on a Friday and the Queen on a Thursday. But this couple decided to wed on a Saturday.

Meghan herself breaks royal tradition because she has been previously divorced, this is found against the royal marriage rules. Then she wasn’t given away by her father due to his medical condition.

When it comes to Prince Harry he has been known as a rule breaker. At the wedding Harry is wearing a wedding ring. “Neither Harry’s grandfather Prince Philip nor brother Prince William wear wedding bands, and his father Prince Charles chooses to wear a signet ring on his pinkie finger, but Harry himself has chosen a platinum band which he will wear on his ring finger.” (British Vogue).

Even the Guest list was Star Studded. Although the guest list was small in comparison to the other royals weddings, the stars invited made up for it. A guest list of 600 people filled with everyone from Oprah to Victoria Beckham.

Last but not least the iconic wedding dress. From Princess Diana’s ivory silk dress to Kate Middleton’s  Alexander McQueen, the wedding dress is arguably the most iconic object of the royal wedding. Meghan Markle’s became the Duchess of Sussex wearing Clare Waight Keller for Givenchy.  The dress was classic and stunning.Meghans states that  chose to work with her for her “timeless and elegant aesthetic, impeccable tailoring, and relaxed demeanour,”

The royal wedding broke barriers fabulously and all those watching couldn’t be prouder.