American Teen on the music scene 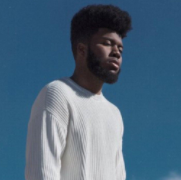 “Young dumb broke high school kids” a line from a song that teenagers in this generation will never forget. Khalid is a 19-year-old artists, he has become a huge hit amongst teenagers. With his upbeat music and promotion of diversity he is rising to the top and influencing the mainstream  music scene.

Khalid vitisited Utah on May 14 where he performed at the Maverik Center. He opened with his hit song “American Teen” and closed it with “Let’s go”. He surprised the crowd by playing two unreleased songs.

The opening act was a new boy band called “Pretty Much” They are a pop group that has been gaining popularity through social media. The boy band had strong dance routines and catchy songs.

The energy was amazing amongst the crowd. “This concert was so much fun, you could tell that khalid was genuinely having a good time which helped make it great.” says Zoe Johnson.

Khalid not only played great songs but his set design and dancers were amazing. Each song had a specialized digital background that caught the attention of all. Khalid has a very close relationship with his dancers and you can tell they love what they do. The dancers had a routine for each song.

“How a lonely teenager made the years freshest, most surprising debut.” says Rolling Stones Magazine. When Khalid made his debut he was catching the attention of everyone. He earned himself 5 grammy nominations and his song “Young Dumb Broke” gained platinum certification by the RIA. Khalid continues to break music records an influence the music scene. With his talent and committed fans his career accomplishments have only begun.