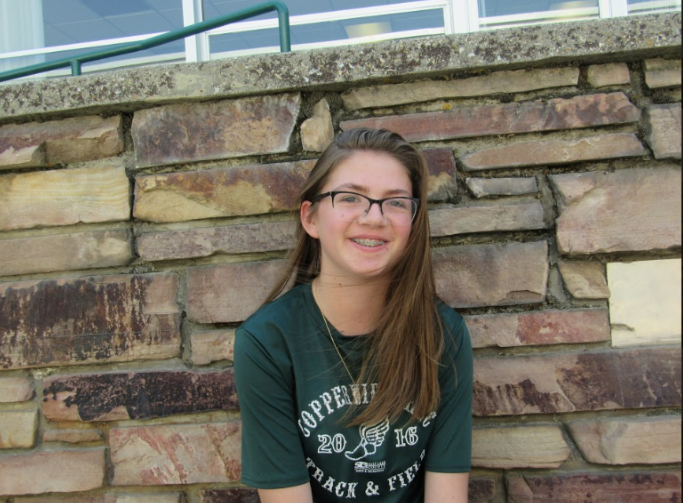 “Anything you can’t sing along to is not worth listening to.”

Those are the words of Magdalene “Maggie” Erekson, a sophomore journalist at Hillcrest High School, talking about her passion for music.

“There’s constantly music playing at my house and I am belting along – always,” said Erekson.

Among the showtunes and pop hits, Erekson croons along with on a regular basis are Broadway hits such as “Newsies,” and Indie songs. As it relates to “Newsies,” it’s not just the music that pulls in this light hearted teenager.

“Ben Cook is gorgeous,” said Erekson, referring to the actor who has a starring role in the Broadway cast.

Dreaming of Cook may help Erekson get through some of the hard tests when she pursues a college degree in journalism.

“(I’m) going to Salt Lake Community College for two years,” said Erekson. “Then I’m going to Northwestern for the journalism program, and then who knows.”

Erekson is noncommittal not because she isn’t good at singing or writing, but because she has several opportunities she can pursue.

The track team at Hillcrest provides Erekson with another outlet for her energies. Erekson runs sprints, relays, and hurdles, but the latter is her favorite.

“I went to regions (in Hurdles) last year, which as a freshman was pretty cool,” she said.  “I don’t want to brag, but like, yeah. I placed in regions as a freshman. I love hurdles.”

Whether she is singing along to “Newsies,” dreaming of being a journalist, or living the life of a track star, Erekson seeks out opportunities to do things where she can rely on herself.

“I’m definitely not into team sports. I hate having people rely on me, but then also I hate having to rely on other people.” said Erekson. “I like track and field because I can just run, and if you didn’t do your best, then nobody else got hurt.”

Erekson is an independent and talented girl with a passion for music, journalism, and track.