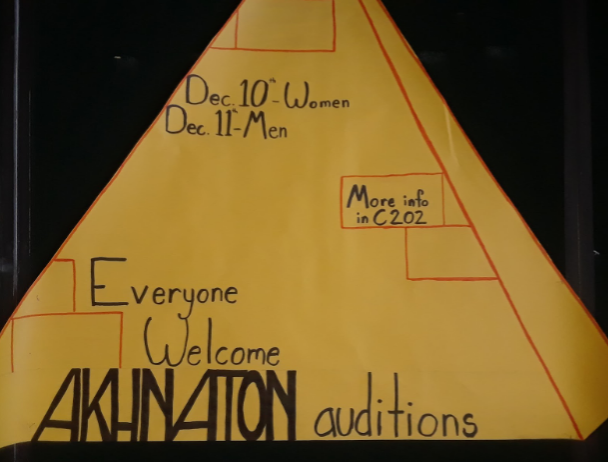 Have you ever wondered what it would be like to be in a show set in Egypt? Well, this is your chance!

On December 10 and 11, auditions for the new spring play, “Akhnaton,” will be held in the auditorium. Hillcrest students invited to audition for the show.

Auditions for women will be Monday, December 10. For those wishing to have a non-speaking part, auditions are from 2:30-3:30. For those who would like a speaking part, come to the auditorium from 3:30-5:15, and have a 45-60 second dramatic monologue prepared.

If you are planning on auditioning for a speaking role, you need to attend the first auditions starting at 2:30. This applies for both men and women.

Almost every aspect of this show is different from other Hillcrest productions, from costumes all the way to set designs.

“There’s a whole lot of political intrigue and suspenseful murder plots and stuff like that. Visually it’s going to look really cool and need some great people to complete the vision.” said Joshua Long, the Hillcrest Theatre teacher.

Along with great sets and costumes, the show calls for people who can make the characters come alive.

Long says that when casting a show, they aren’t looking for the “best actors,” but rather the directors are “matching students’ strengths to the roles available in a given show.”

Taking Egyptian characters and stories and bringing them to life is something that would take effort and talent. Sometimes actors come to audition for a show, and it is their first time auditioning, or even performing.

Long loves working with students who are new to acting, and often times will “take a chance on kids who maybe aren’t fantastic in their audition, but (sees) something in them that we can train and work with.”

For the show “Akhnaton” specifically, Long is looking for students in auditions who “can be human beings. Students who relax and just be a normal human being usually do really well.”